Now here is a plant you’ll either love or hate…a passer by once asked, whilst admiring it’s juvenile leaves, ‘is it a cabbage?’  Take a look at a year (and a bit) in the life of Verbascum bombycerferum and see for yourself…..

Verbascum bombyciferum is a biennial which means it will form a rosette of leaves in it’s first year, flower in its second year then set seed for the process to begin again ….. 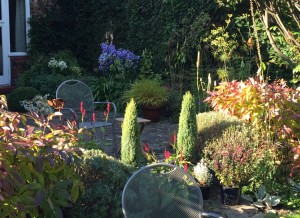 Ask a Verbascum what soil type it prefers and in my garden it will tell me clay! I have never had a problem growing them here, although admittedly they seed more readily in the paving cracks and on the edges of borders. However, the best position for a Verbascum is in a well drained alkaline, chalky or sandy loam. It is very drought tolerant. 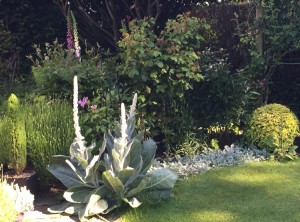 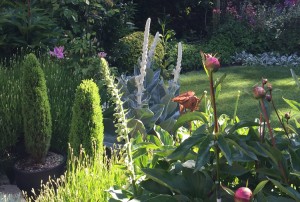 The Verbascum happily over winters in our British climate, providing a rosette of felted silver grey leaves which contrast well with other evergreens. The odd slug likes to shelter underneath, and the lower leaves can become a little sodden if they are touching wet soil. But spring soon brings a fresh batch of huge leaves…. 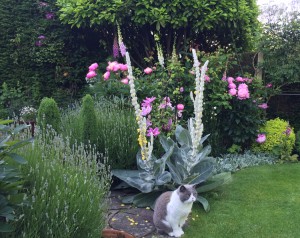 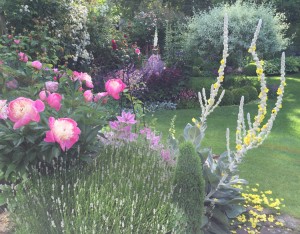 Verbascum bombyciferum associates well with so many plants. Here in a romantic setting with the Peonies, Clematis and Roses. It works equally well with Mediterranean plants or in a gravel garden. The silver leaves compliment the pink, mauve and blue flowers here in my garden. They also pick up the leaves of the silver pear in the distance and contrast with the darker greens of the Lavender, Juniper, and Roses. Even for those who dislike strong yellow in their borders, the Verbascum’s tiny yellow flowers peeping out amongst the downy spikes should win them over. 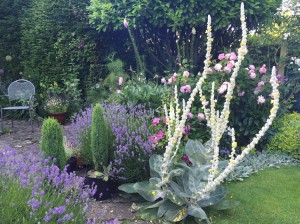 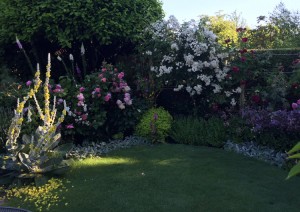 In June and July Verbascum bombyciferum is the star of the show. Here it doesn’t work alone. It picks up the lime leaves of the Philadelphus and contrasts with the soft pinks and blues of the Roses, Lavender and Catmint. Once or twice a week after the grass has been mown, it lays down a carpet of petals. 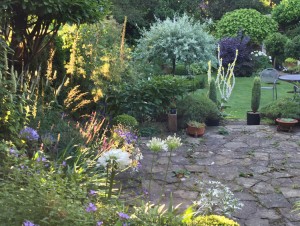 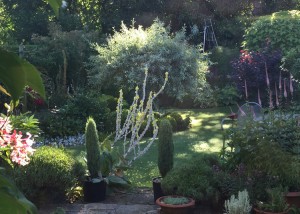 From May till September,this amazing plant has outlasted the Foxgloves, Peonies, Lavender, Roses, Nepeta. It is now flowering alongside the Agapanthus, Asters and Sedum. These flower spikes will last into the winter, blackening with time, providing winter structure in a border. I have to admit that I pull them up in October to make room for replanting with another seedling that I have rescued from the paving cracks earlier in the year. Although Verbascum bombyciferum is a self seeder, I have never found it to be a nuisance. It prefers to drop a few seeds locally. This might be an advantage of clay soil…I don’t know !